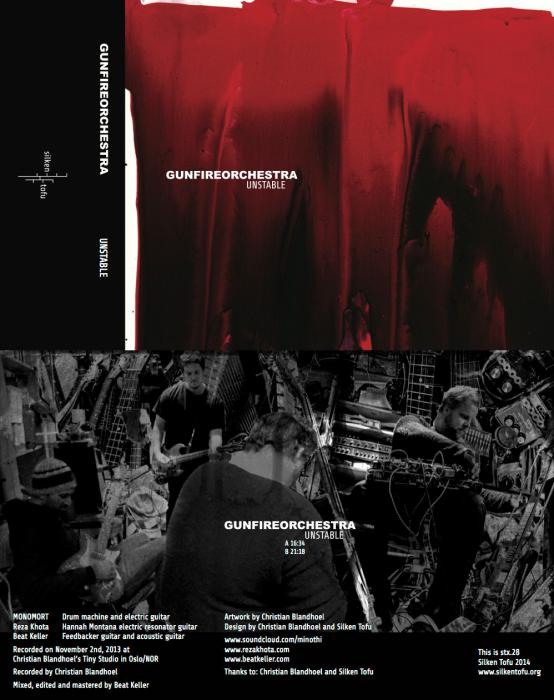 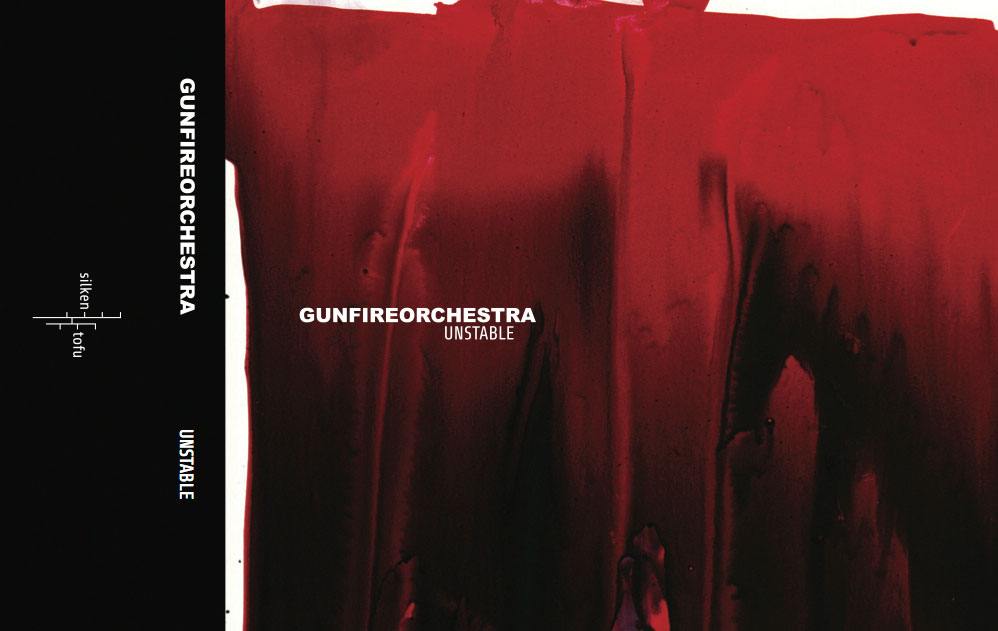 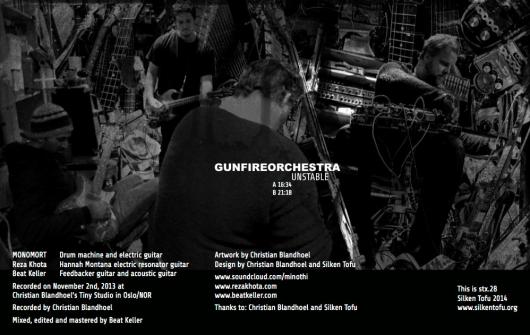 GUNFIREORCHESTRA =
MONOMORT + REZA KHOTA + BEAT KELLER
When Bitch Split Panic and the guitar duo Beat Keller & Reza Khota were on tour in Norway and Switzerland in fall 2013, the three musicians met up with Norwegian visual artist and musician Christian Blandhoel in his workshop in Oslo. The trio ended up recording in Blandhoel’s Tiny Studio, using his modified instruments. The result is two pieces of experimental guitar improvisation with feedback. Ranging in sound from subtle and sparse minimalism to full-on noisy dissonance, whilst always holding the interest of the listener and maintaining a certain tension between the three protagonists, this recording showcases the unmistakable talent for composition and improvisation of the threesome.

MONOMORT is the creative output of Norwegian musician Morten Minothi Kristiansen. His raging teens marked the start of a love affair with soothing folk and church music, ultimately leading to an everlasting search through all music and art he came across. His musical work is now focused towards experimental sounds and noise. He’s also part of the experimental noise/rock outfit Bitch Split Panic, noise duo Golden Retriever and the founder of the EDGE OF WRONG festival for exploratory music and art, taking place in Norway and South Africa.

REZA KHOTA was born in Johannesburg, South Africa, where he studied classical guitar at the Wits University. From an early age he has practiced improvisation and listened closely to the recordings of Miles Davis and all those who worked with him. He has played with just about every important jazz musician in South Africa and also on many major festivals. Other projects include the Reza Khota Quartet featuring Buddy Wells, Shane Cooper and Jonno Sweetman. Reza has matured into a guitarist with a distinct voice. Viewing the guitar as a miniature orchestra, he performs with an unconventional musicality and technical facility that recalls the rich history of the instrument. He is equally comfortable performing composed and improvised music.

BEAT KELLER is a Swiss guitarist, multi-instrumentalist and composer, who studied at the Hochschule für Musik und Theater in Zürich and the Musikhochschule in Luzern. Among his current projects are Keller’s 10, Beat Keller & Reza Khota (CH/SA, guitar duo), The Cape Town Punk Jazz Arkestra Mislead by Beat Keller and the Peckinpah Trio (CH/USA).

Delivery via standard mail
all prices are incl. shipping